What is Coanda effect?
The Coanda effect is the tendency of a fluid jet to stay attached to a convex surface. It is named after Romanian inventor Henri Coandă, who described it as "the tendency of a jet of fluid emerging from an orifice to follow an adjacent flat or curved surface and to entrain fluid from the surroundings so that a region of lower pressure develops. 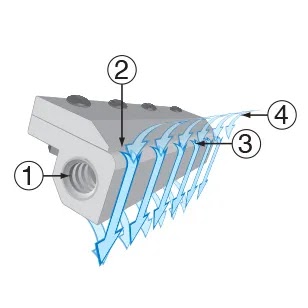 Compressed air flows through an inlet (1) into the plenum chamber of the Super Air Knife. The flow is directed to a precise, slotted orifi ce. As the primary airflow exits the thin slotted nozzle (2), it follows a flat surface that directs the airflow in a perfectly straight line. This creates a uniform sheet of air across the entire length of the Super Air Knife. Velocity loss is minimized and force is maximized as the room air (3) is entrained into the primary airstream at a ratio of 40:1. The result is a well defined sheet of laminar airflow with hard-hitting force and minimal wind shear.

Henri-Marie Coanda (1885-1972) discovered the Coanda Effect in1930. He observed that a stream of air (fluid) emerging from a nozzle tends to follow a nearby curved surface, if the curvature of the surface or angle the surface makes with the stream is not too sharp. For example, if a stream of fluid is flowing along a solid surface which is curved slightly from the stream, the fluid will tend to follow the surface.
A number EXAIR products are designed to utilize the Coanda Effect and aid their performance. In some products, the Coanda Effect aids to create an amplification area where additional ambient air is drawn into the total airflow to increase total volume of air upon a target. This creates a more efficient and effective product. Also, since not as much compressed air is required, the noise levels decrease for products like EXAIR’s air knives, air nozzles, air jets and air amplifiers. EXAIR has been successful with positive impact for compressed air energy savings and noise reductions helping us meet or exceed OSHA Standard.

at July 07, 2022
Email ThisBlogThis!Share to TwitterShare to FacebookShare to Pinterest